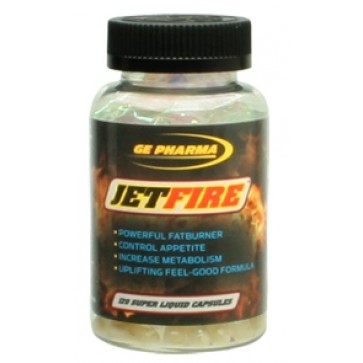 You've tried lots of diet and energy pills and drinks and you've got the jitters, and it doesn't seem to help. What you won't feel is "jacked up." That's because GE Pharma JetFire gives you "smooth energy" that lasts. It wears off gradually, not with a sudden crash. Inexpensive and cheap Anhydrous Caffeine is found in all diet and energy drink and tablet and capsule formulas and is known for giving people a jump start, but it is also known for giving people a crash.

Make sure to read the Jetfire Reviews

What can you expect when taking JetFire?

Typically, within 15-30 minutes, users of JetFIre™ will experience a noticeable charge of energy and slight warming sensation as core body temperature elevates and thermogenic effects begin. This comfortable sensation enhances mental focus and energy levels that will last generally for 4-6 hours. In a recent clinical study users Caffeine Alpha Ketogluterate which is contained in patented JetFire™, reported that they are more comfortable, less nervous, and feel a lot better that when they used other anhydrous caffeine based diet formulas that did produce jittery side effects. JetFire™, is unique and different and has effects that are comfortable and actually very desirable and make you feel great!