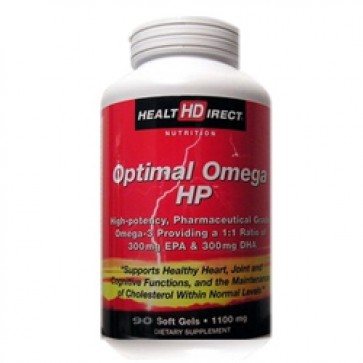 - Each batch of Optimal Omega HP is handled, processed and encapsulated with the utmost precision then tested by an independent lab to confirm the product is free of contaminates - Optimal Omega HP contains unique marine basedantioxidant blend.

Manufactured in a pharmaceutical drug licensed facility How Does Optimal Omega Work? Optimal Omega HP is an ultra pure; ultra refined specialized Omega - 3 fatty acid. It provides a one to one ratio of 300 mg of EPA to 300 mg of DHA allowing for proper enzymatic action and maximum utilization. The evidence surrounding the health benefits of Omega-3 fatty acids are growing to the point that the federal government recently approved a qualified health claim stating that supportive but not conclusive research shows that consumption of EPA and DHA omega-3 fatty acids may reduce the risk of coronary heart disease.