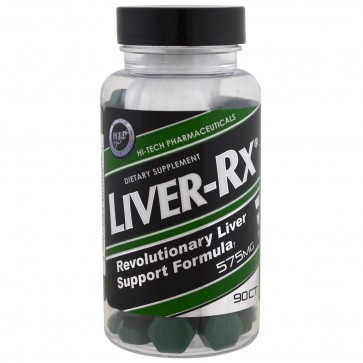 About this item
Hi-Tech Liver-RX 90 Capsules is a comprehensive liver support formula that addresses all avenues in which nutraceutical supplementation can have a positive influence on liver health.
Product Details

Liver-Rx is a comprehensive liver support formula that addresses all avenues in which nutraceutical supplementation can have a positive influence on liver health. Typical liver support formulas focus primarily on just silymarin. Other products fail to incorporate state-of-the-art, synergistic compounds that enhance liver health and minimize the harmful effects from substances, such as alcohol and drugs, that can contribute to liver toxicity.

The liver, which is about half the size of a football, is the largest organ in the body and is surely one of the most important organs due to its numerous roles in metabolism and detoxification. The liver is responsible to the body for numerous life-sustaining functions. One of the primary functions of the liver is the responsibility of regulating what substances enter the bloodstream to ensure protection for the remainder of the body, which has earned the liver the title of "The Gatekeeper." While the liver allows familiar and other safe molecules to enter the bloodstream, it attempts to destroy alien and unsafe molecules to prevent them from entering the bloodstream. The liver also helps convert substances found in food into chemical compounds that the body can use. The liver also stores sugar in the form of glycogen, which it converts into glucose for release into the bloodstream for energy when the body's blood sugar level falls too low. The liver also helps maintain hormone balance, stores vitamins A and D, produces bile for the breakdown of dietary fats, oversees the transportation of fat, controls the production and excretion of cholesterol, and manufactures new body proteins. In short, within the human body, the liver is a jack of all trades and a master of them all. Unfortunately, the liver takes a real pounding with all of the extra work we put it through. Certain lifestyle risks and medical conditions create stress for the liver. We subject the liver to alcohol, which induces a free radical blitz that leads to destruction throughout the body. We also subject the liver to all sorts of recreational (including anabolic steroids), prescription, and OTC drugs, and the list goes on and on...

Liver-Rx tackles liver health through a broad-spectrum of herbal support agents, that also provide the liver with a healing environment. Typical liver products lack many remarkable state-of-the-art liver support compounds (most usually contain only milk thistle extract and maybe one or two other inexpensive ingredients). There are numerous compounds on the liver health radar screen that minimize the harmful effects from potentially toxic substances, such as alcohol and drugs, and provide other liver-shielding properties. Liver-Rx contains high-quality herbal extracts and other antioxidants that act as hepatoprotective agents, including protecting liver cells from oxidative stress. These compounds include the milk thistle extract, Silybum marianum (silymarin), N-acetyl-L-cysteine (NAC), alpha lipoic acid (ALA), Picrorhiza kurroa, Schisandra chinensis, and Glycyrrhiza glabra (licorice).

Silymarin leads the way in the Liver-Rx formula and improves liver function by helping to protect liver cells (hepatocytes) from toxins, by stabilizing the structural integrity of hepatocytes, and by providing for the production of proteins to aid in liver cell regeneration. NAC is well-known as a powerful antioxidant and scavenger of free radicals (unstable substances that are released when the body burns oxygen or is exposed to certain pollutants, such as tobacco smoke). NAC suppresses free radicals inside liver cells and helps maintain healthy levels of intracellular glutathione, a naturally-occurring antioxidant in the body (when liver function is compromised, glutathione is depleted, which leads to further damage). ALA is well appreciated for its powerful antioxidant properties by protecting cells against the damage of free radicals. ALA also assists in recycling or preserving other antioxidants, including Vitamins C and E and also glutathione. Another interesting liver support herb included in Liver-Rx is Picrorhiza kurroa, which stimulates liver tissue growth and promotes recovery from tissue damage. Its antioxidant kutkins help support healthy liver tissue by scavenging alcohol-induced excess free radicals, affording protection against alcohol-induced damage. Schisandra chinensis is another component included in Liver-Rx for its protective effects on the liver, including its action of activating enzymes that produce glutathione. Glycyrrhizia glabra also joins the congregation of other liver support compounds for additional anti-inflammatory and antioxidant support.

To ensure that your liver is functioning optimally, support the organ that supports you with Liver-Rx!

Take three tablets daily. Do not exceed 9 tablets per day.