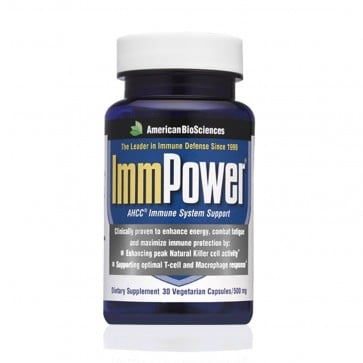 About this item
Immpower (AHCC Proprietary Blend) was developed over 15 years ago in Japan. Immpower has been well researched for effectiveness and safety. Today American BioSciences Immpower AHCC is the best-selling supplement in Japan, used to support a strong immune system by activating the body's Natural Killer Cells, T-Cells and Macrophage activity.
Related Products 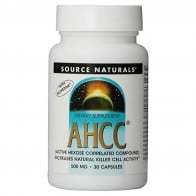 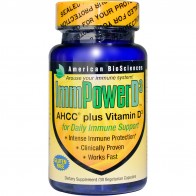 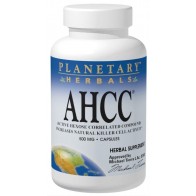 Immpower AHCC  is developed by combining several species of mushrooms used in traditional Japanese healing to make one, extremely powerful, hybridized mushroom. This hybridized mushroom is grown in a liquid medium containing rice bran and enzymatically modified to be readily absorbable. American BioSciences Immpower AHCC's superior ingredients are obtained by a highly specialized cultivation and extraction method, and cannot be found in ordinary mushrooms.

ImmPower Supports Your Immune System's Front Line Defenses
Natural Killer Cells (NK cells) are the white blood cells your immune system calls on first. The cytotoxic granules they carry are the chemical warfare ammunition NK cells use against invaders. ImmPower not only increases the total number of available NK cells, but supports granule formation within NK cells, arming them and supporting your immune system's first line of defense.

ImmPower promotes enhanced cytokine production. These are the chemical messengers your immune system uses to call in the body's defenses, coordinating the functioning of your immune system's Macrophages, T-Cells and B-Cells. T-Cells are white blood cells responsible for cell mediated immunity — the integrated response required for the successful defense of your health. Macrophages produce cytokines, start the process of antibody production and through phagocytosis, directly destroy invaders.

What This Means To Your Health
In effect, your body is constantly at war with millions of microscopic assailants that float through the air, enter our body through our food and water, and are on every object we handle, every hand we shake. Under the best of circumstances you can't avoid contact with these potentially harmful organisms. During flu season, it is impossible.

The exquisite design of your body provides the ultimate defense against these invaders. Your immune system has an army of trillions of white blood cells that are constantly on patrol. When functioning properly, the immune system identifies, remembers, attacks and destroys the vast majority of invaders before they can cause any harm.

Maintaining Your Guard
Ideally, you maintain your immune system's guardians at a level capable of rendering every attack harmless. Stress, inadequate diet, lack of exercise, depression, and the aging process all weaken the body's abilities to defend itself.

Your Defenses
Medical research shows that you can support the peak functioning of your immune system. Lifestyle changes that reduce stress, increase exercise, improve nutrition, and the use of direct immune support supplements — ImmPower — combine to create a web of support for a healthy immune system.