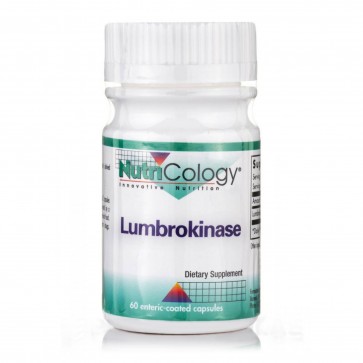 Lumbrokinase 60 Capsules is an enzyme derived from earthworms Lumbricus rubellus. Research has shown that lumbrokinase may support healthy coagulation of blood within normal levels and enhance fibrinolytic activity, i.e. similar to nattokinase.

Lumbrokinase (LK) consists of a group of proteolytic enzymes including plasminogen activator and plasmin extracted from a specific species of earthworm. The plasminogen activator (e-PA) in LK is similar to tissue plasminogen activator (t-PA) from other sources, which makes it possible to show the thrombolytic activity only in the presence of fibrin. Therefore, LK has the advantage of not causing excessive bleeding. The activity of LK is much higher than most traditional Chinese products that are available in the United States. Four phases of clinical studies have been done on LK at the Beijing Xuanwu Hospital (the top hospital in nerve & internal medicine in China). LK has been widely used in over 100 hospitals in Beijing since 1995. In Jakarta, LK has been used in thousands of hospitals and stores, in more than 20 provinces and cities, as well as in Hong Kong, Taiwan, Southeast Asia, and Europe.

LK is recognized by the Ministry of Public Health in China. LK capsules technology was awarded a certificate of National Significance Achievement in Science and Technology, listed as the Promotional project of National Key Technology Achievement and the National Torch Plan Program, and selected as National Key New product by six major ministries.

Suggested use of Lumbrokinase:
As a dietary supplement, 1 or 2 capsules in the morning, 1 or 2 capsule in the afternoon and 2 capsules at bedtime, or as directed by a healthcare practitioner. Take with 8-10 oz of water, with or without food. Use under medical supervision if taking anticoagulant drugs. Contraindicated in any conditions associated with bleeding.