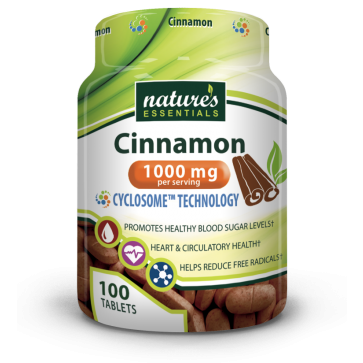 About this item
Nature’s Essentials Cinnamon combines the cinnamon bark with our Cyclosome Technology creating the most advanced cinnamon complex available with a vortex of solubility on a microscopic level increasing the body’s ability to absorb the good stuff it needs.
Product Details

The bark of cinnamon has been used in traditional medicine for centuries. Research has shown that cinnamon bark may support healthy blood pressure levels already within a healthy range and may support healthy glucose metabolism (help maintain blood sugar levels already within a healthy range), may support the body in producing lower cholesterol levels, may reduce the body’s response to inflammation, and supports the body in fighting bacteria. However, Cinnamon is not well absorbed by the body and is not readily water soluble. Therefore, Nature’s Essentials Cinnamon combines the cinnamon bark with our Cyclosome Technology creating the most advanced cinnamon complex available with a vortex of solubility on a microscopic level increasing the body’s ability to absorb the good stuff it needs.

With our Cyclosome™ Liposomal Delivery Technology Nature’s Essentials Cinnamon is unique and unlike any other Cinnamon product available on the market today. The Cyclosome™ Liposomal Technology is specially designed for optimal absorption by taking an insoluble ingredient like Cinnamon that only has a bioavailability of roughly 50-62% and making it not only soluble equivalent to a homogenous emulsification while also still protecting the active ingredient with lipid technology. This barrier of protection allows the 1% minimum of doubly-linked polyphenol type-A polymers (which are considered to be the bioactive component of cinnamon) to be fully absorbed rather than lost in the acids of the stomach. Nature’s Essentials Cinnamon is truly the most technologically advanced Cinnamon supplement on the market today.

Cinnamon bark contains procyanidins and catechins. The components of procyanidins include both procyanidin A-type and B-type linkages. These procyanidins extracted from cinnamon and berries also possess antioxidant activities.

The aqueous and alcoholic extract of cinnamon potentially significantly inhibits fatty acid oxidation and lipid peroxidation in vitro. Different flavonoids isolated from cinnamon have free-radical-scavenging activities and antioxidant properties. A study of the inhibitory effects of cinnamaldehyde and other compounds of cinnamon on nitric oxide production revealed that cinnamaldehyde possesses potential activity against the production of nitric oxide as well as the expression of inducible nitric oxide. The highest inhibitory activities were reported as 81.5%, 71.7%, and 41.2% at 1.0, 0.5, and 0.1 µg/µL, respectively. Lin et al. reported the in vivo antioxidant activity of two different extracts, the ethanolic and hot water extracts of the dry bark of C. cassia. The ethanolic extract of C. cassia exhibited significant inhibition (96.3%) compared to the natural antioxidant α-tocopherol (93.74%). Overall, cinnamon exhibited higher antioxidant activities compared to that of other dessert spices.

The essential oils and some of the major compounds present in cinnamon, including (E)-cinnamaldehyde, eugenol, and linalool, were investigated in reference to peroxynitrite-induced nitration and lipid peroxidation. Eugenol and the essential oils were more effective than the other two compounds. In a comparative study among 26 spices, cinnamon showed the highest antioxidant activity, indicating that it can be applied as an antioxidant used in foods. Another study investigated the effectiveness of a mixture of spices on oxidative stress markers as well as the antioxidant activity in high fructose-fed insulin-resistant rats. The mixture, which consisted of 1 g/100 g cinnamon bark, showed a significant antioxidant activity compared to the fructose alone group. Volatile oils from C. zeylanicum showed significant biological activities.