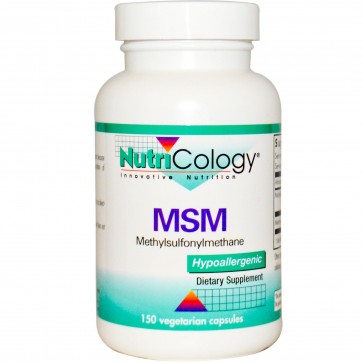 This product has been discontinued.

We have discontinued this product permanetly. Please find alternative products from below section.
About this item
Nutricology's MSM - Methylsulfonylmethane is a bio-available form of sulfur. Sulfur is a major component in many of the body’s proteins, tissues, hormones and enzymes.
Product Details

Nutricology's MSM - Methylsulfonylmethane is a bio-available form of sulfur. Sulfur is a major component in many of the body’s proteins, tissues, hormones and enzymes. Research indicates that MSM may have an inhibitory effect on abnormal cross-linking of collagen, which can support the formation of healthy connective tissue and retention of cartilage, as well as the reduction of scar tissue. It also may enhance mucosal membranes. In addition, research has shown MSM to be beneficial in conditions where inflammation, unfriendly microbes and allergens are involved in adverse reactions.

Methylsulfonylmethane, or MSM, is a water-soluble solid compound, also known as dimethyl sulfone. It is a direct constituent of DMSO, and is sometimes called DMSO2. MSM is a source of biological sulfur, which is plentiful in all living organisms, amounting to about 2% of the dry weight of most animals. Through the formation of disulfide bonds, sulfur is the foundation for proper conformation of extracellular body proteins, holding connective tissue together as well as maintaining the structure of antibodies and hormones. Large amounts of sulfur are found in hair and nails, and sulfur plays a role in the detoxification of the liver.  Intracellular sulfhydryl (thiol) groups are also vital for the catalytic function of many enzymes.*

Due to its inert nature, MSM is non-allergenic, non-pyretic, and seems to have minimal undesirable effects. Long term usage or high doses of MSM encourage urinary excretion of molybdenum. For that reason, we have added molybdenum to our MSM formula.*

Suggested use of MSM:
As a dietary supplement, 1 to 3 capsules one to five times daily, or as directed by a health practitioner.