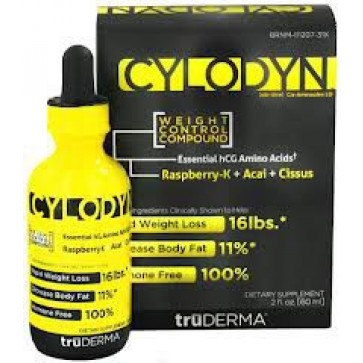 Usually ships within 1 - 2 business weeks. Will not affect in-stock shipments.

About this item
Cylodyn by TruDerma is a completely new and potent alternative to the ever-so-popular HCG diet.
Product Details

Cylodyn by TruDerma is a completely new and potent alternative to the ever-so-popular HCG diet. By mixing the amino acids found in HCG with Acai, green tea, caffeine, Cissus and Raspberry Ketone, Cylodyn becomes a truly potent supplement that can help dieters to lower their body fat and eventually, help them lose the weight.

Raspberry ketone is a very popular compound that is making waves right now in the fat loss industry. A major component of Cylodyn, Raspberry Ketone is a chemical that is found in red raspberries and has been considered as a potent solution for those who want to lose weight, either in overweight or obese levels. One of the major advantages of this compound is that it increases lean body mass. It has become a popular product for weight loss when it was presented as a weight loss solution in the critically acclaimed show of Doctor Oz. while it has been touted heavily in the internet, Raspberry Ketone still needs considerable number of studies to ensure that it lives up to consumer expectations and scientific analysis. According to available studies on animals and laboratory analysis, the compound seems to help increase metabolism. Studies also point out possible connection to the hormone adiponectin.

Raspberry ketone has a unique chemical structure that is similar to that of synephrine which is a known stimulant which is one quality to look for in most weight loss and fat reduction supplements. If you are seeking top quality solutions for your body, you would have to consider the unique benefits of Cylodyn. It is now becoming one of the most popular raspberry ketone products available due to the mix of other essential components including green tea that is also widely known for antioxidant and weight loss benefits.

Adults take 1 mL by mouth before 2 main meals, for a total of 2 servings per day. Shake well before use. Refrigerate after opening.

Keep out of reach of children. Limit the use of caffeine-containing medications, foods or beverages while taking this product because too much caffeine may cause nervousness, irritability, sleeplessness and, occasionally, rapid heart beat

Use in conjunction with a sensible diet and exercise program. Individual results will vary.