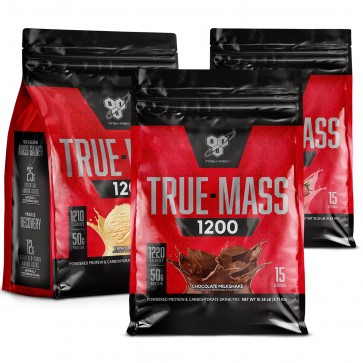 BSN True Mass 1200 is an ultra-premium super mass gainer designed for individuals with high caloric requirements or those who have difficulty adding and maintaining mass.

WHY TRUE-MASS 1200?
TRUE-MASS 1200 is an ultra-premium super mass gainer designed for individuals with high caloric requirements or those who have difficulty adding and maintaining mass. BSN's signature protein formula is paired with a unique complex carbohydrate blend that includes ground whole oats for a convenient source of high-calorie nutrition. And TRUE-MASS 1200 distinguishes itself with a delicious milkshake-like taste that makes getting those extra calories in a pleasure rather than a chore. For the true hard-gainer or anyone in need of serious caloric support, TRUE-MASS 1200 is the ultimate mass-gaining option.

Athlete Bio
After years of dreaming of being a competitive bodybuilder, Guy finally stepped onstage in 2003, still unsure of his full potential. After a few years of competing on the local NPC level, he decided in 2005 to take his career to the next level. After taking a year and a half off from 2005-2007, Guy returned to the stage to win another local show, then went on to win a Jr. National show a few weeks later. This success led to his first attempt to secure a pro card at the 2007 Nationals, where Guy came in a close second to Jose Raymond. After taking another year off to work on his physique, Guy focused his sights on the 2008 Nationals and came in better than ever, winning the stacked middleweight class and earning his place as a new IFBB pro.

Guy then took some more time off to gather himself and pack on some size for the newly introduced 202 class. Making his pro debut in 2010, Guy's rookie year fell short of his own expectations as he finished sixth at the Europa Battle of Champions and then fifth at the Europa SuperShow. Hardly a bad start to his pro career, but Guy was nonetheless unsatisfied. After deciding to team up with old friend and fellow IFBB pro Fakhri Mubarak, Guy put in a tremendously productive offseason and then took second place at the 2011 IFBB Jacksonville Pro, weighing in at 202 lbs on the button after having competed at 186 lbs in 2010. A week later he was right back onstage and took first place at the 2011 Europa SuperShow for his first career pro win. Guy followed that up with what he calls "a dream come true," taking the stage with the best of the best at the 2011 Olympia 202 Showdown!

As one of the youngest competitors in the sport today, Guy has yet to achieve his full potential and continues to strive to get better and better. And with the 202 class increasing to 212 in 2012, he now has an additional 10 lbs to work with as he continues to grow into his physique. With the help of BSN and their outstanding products, Guy is excited to see what the future holds for him as he continues to pull double duty representing BSN to the world.

About Bio-Engineered Supplements and Nutrition
Bio-Engineered Supplements and Nutrition, Inc. (BSN) was founded in 2001 and since then has become a global leader in the sports nutrition marketplace through relentless dedication to creating dynamic, cutting-edge, and result-producing products. BSN products and the brand itself have won more than 35 sports nutrition awards over the course of the last six years, more than any other company in the industry. This legacy of performance has created tremendous brand awareness and loyalty for the company, building a faithful following of consumers, athletes and fans in the process.

BSN's reach and exposure are truly global, with products shipped to over 40,000 retailers nationally and distributed in over 90 countries worldwide. Its diverse product line has always produced results among the company's core demographic; however, the majority of its products are multi-functional enough that they offer applications for a myriad of lifestyles and consumer types, setting BSN apart from a number of its competitors whose products lack this valuable mass appeal. Given this potential for tapping into broader markets, BSN is committed to bringing top-of-the-line nutritional supplementation and beverages to a mass audience through broadened distribution channels and innovative partnerships.