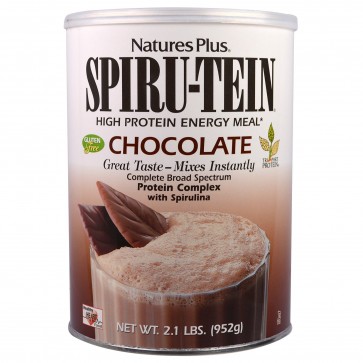 See other Nature's Plus products

About this item
Nature's Plus Spiru-Tein Chocolate is rich in flavor and nutrition! One of life’s true pleasures is enjoying a delicious treat you know is good for you in every way.
Product Highlights
Product Details

Blue-green algae, of which spirulina is a well-known example, is a group of 1,500 species of microscopic aquatic plants. The two most common species used for human consumption are Spirulina maxima and Spirulina platensis. Spirulina is particularly rich in protein and also contains carotenoids, vitamins, minerals, and essential fatty acids.

Where is it found?
Blue-green algae grow in some lakes, particularly those rich in salts, in Central and South America, and Africa. They are also grown in outdoor tanks specifically to be harvested for nutritional supplements.

Who is likely to be deficient?
As it is not an essential nutrient, blue-green algae is not associated with a deficiency state. However, people who do not consume several servings of vegetables per day could benefit from the carotenoids and other nutrients in blue-green algae. Since it is a complete protein, it can be used in place of some of the protein in a healthy diet. However, very large amounts are required to provide significant quantities of these nutrients from blue-green algae.

How much is usually taken?
Blue-green algae can be taken as a powder or as flakes, capsules, or tablets. The typical manufacturer’s recommended intake is 2,000–3,000 mg per day divided throughout the day. However, typical amounts shown to have helpful properties in animal studies would be equivalent to 34 grams per day or more, for a 150-pound human.

There is one case report of a man who developed liver damage while taking spirulina. As he was also talking three prescription medications, it is not clear whether the spirulina caused or contributed to the liver injury.