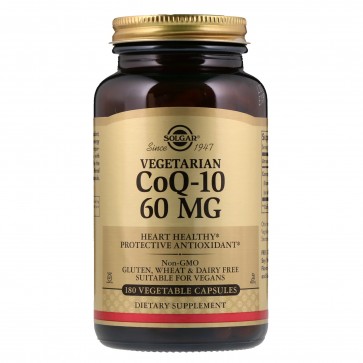 Availability: Out of stock

About this item
Solgar Kosher Coenzyme Q-10 30 mg 60 Capsules (CoQ10) also known as Ubiquinone is an essential component in the mitochondria of our cells.
Product Highlights
Product Details

Coenzyme Q10 (CoQ10) also known as Ubiquinone is an essential component in the mitochondria of our cells. The mitochondria are the energy-producing parts of cells. CoQ10 is involved in the manufacture of packets of energy called ATP. It is thus essential to liberate energy from the food we consume.

The body synthesises CoQ10, but deficiencies can exist. These can be the result of nutritional deficiencies, a genetic or acquired defect in CoQ10 synthesis, or simply increased tissue needs. Metabolically active tissue has the highest requirement for CoQ10. Cardiovascular disease, for example, may indicate an increased requirement for this compound because heart tissue is one of the most metabolically active tissues in the body.

Besides the ability of CoQ10 to improve energy production within the body, it also has potent antioxidant activity, helping to protect the body from the damaging effects of toxins. This activity is however mainly limited to protection against lipid peroxidation (damage to fats). It has a sparing effect upon vitamin E and works together with vitamin E in protecting fat-rich components in the body such as cell membranes, triglycerides, cholesterol, and the fatty tissues of the brain and the rest of the nervous system.

The most heavily researched clinical use of CoQ10 is in the treatment of cardiovascular diseases such as high blood pressure, congestive heart failure, angina, cardiomyopathy, mitral valve prolapse and in recovery from coronary artery bypass surgery. CoQ10 deficiency is common in cardiac disease patients. Heart muscle cells also use fats primarily as their energy source and CoQ10 is critical to the metabolism of fatty acids in the mitochondria. The prevention of the oxidation of fatty acids by CoQ10 is thus of particular benefit to the health of the cardiovascular system.

Several studies indicate an immune-enhancing effect from the supplementation of CoQ10, including an improvement in the production of antibodies.

Sufferers of peridontal disease (gum disease) have been found to have low levels of CoQ10. In dental surgery studies, supplementation of CoQ10 was found to increase the rate of post-operative healing.

Studies of sedentary individuals have shown that CoQ10 improves workout capacity and oxygen transport. These factors may be of potential benefit to trained athletes to improve physical performance. The antioxidant activity of CoQ10 would combine well in this respect due to the fact that aerobic exercise accelerates free radical damage.

CoQ10 may be potentially beneficial when combined with a weight-loss programme because of the requirement for CoQ10 in the metabolism of fat into ATP to be used as a source of energy.